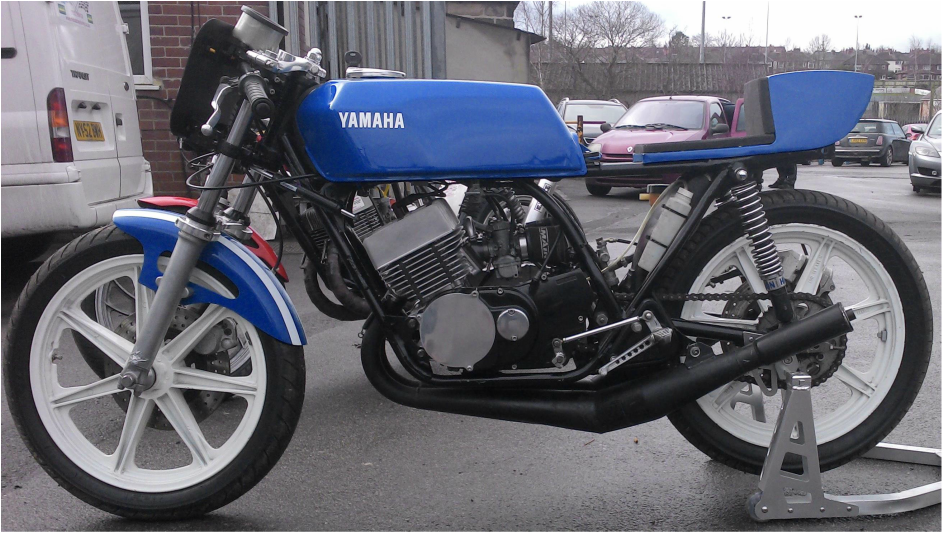 This is the most recent addition to the team. It is owned by Keith Howard and it is his first ever race bike. Being what you might call a bit of a 'Yamaha' man, he is a total RD nut and currently has enough RD250 bits on the shelf to make another 2 race bikes with!

2015 will be Keith's first season of racing (orange bib time), having well and truly caught the bug being in the paddock with us. He came to watch the CRMC at Brands Hatch last year and stumbled across a silver RD400F in race trim for sale, it was at the right price so he didn't hesitate and handed over the cash. The frame turned out to actually be RD250E, but it had an RD400 motor in it, so my dad managed to talk Keith into putting it back as a 250 so that he could run in the newly formed 250 Air Cooled class that we run the X7 in. The photo above is the bike as it looks now, with an RD250C engine back where it should be, and it's sat outside Mick Abbeys workshop. It will be equipped with the same tune and pipes that our last RD250 underwent, and it promises to be a cracking little bike for Keith to learn his way round in his first season, with some help from us.

Lets start with the beginning - this is the RD400 as Keith purchased it last year. He hadn't planned to buy a race bike, but came to brands to watch some classic racing and went home the owner of a race ready air cooled Yamaha pictured below.... 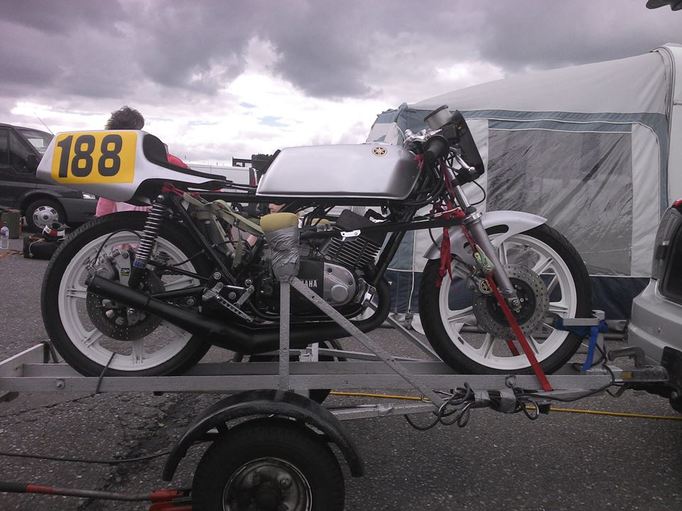 A trip up to Mick Abbey was pretty much a must for Keith having seen how well my X7 goes, I was heading up there anyway to have my pipes repaired after my spill at Cadwell last season so I asked Mick if he could do something with Keith's bike as well. Keith chucked his bike in the back of my van and off we went. We spent all day at Micks tinkering with Keith's bike on the Dyno and squeezed around 34hp out of it with a totally standard engine - to be fair we were all pretty impressed with this figure. Having talked through options with Mick, Keith decided to leave his bike behind and let Mick port the barells and build some nice pipes to replace the Swarbricks it came with. A month or so later we headed back up to Harrogate where Mick is based and put Keith's newly tuned bike back on the same Dyno and gave it a run... It ran like a bag of spanners?! Coughing and spluttering, we played with Jets and checked the timing and still no joy. Eventually we screwed some new 'colder' race plugs in the heads and away she went - perfect through all the gears. Mick did a run and when the graph came up we couldn't believe our eyes - 52hp! Mick did another run, which came back more or less the same and several more later they were all hovering round the 53-53hp mark, one even made 54hp! 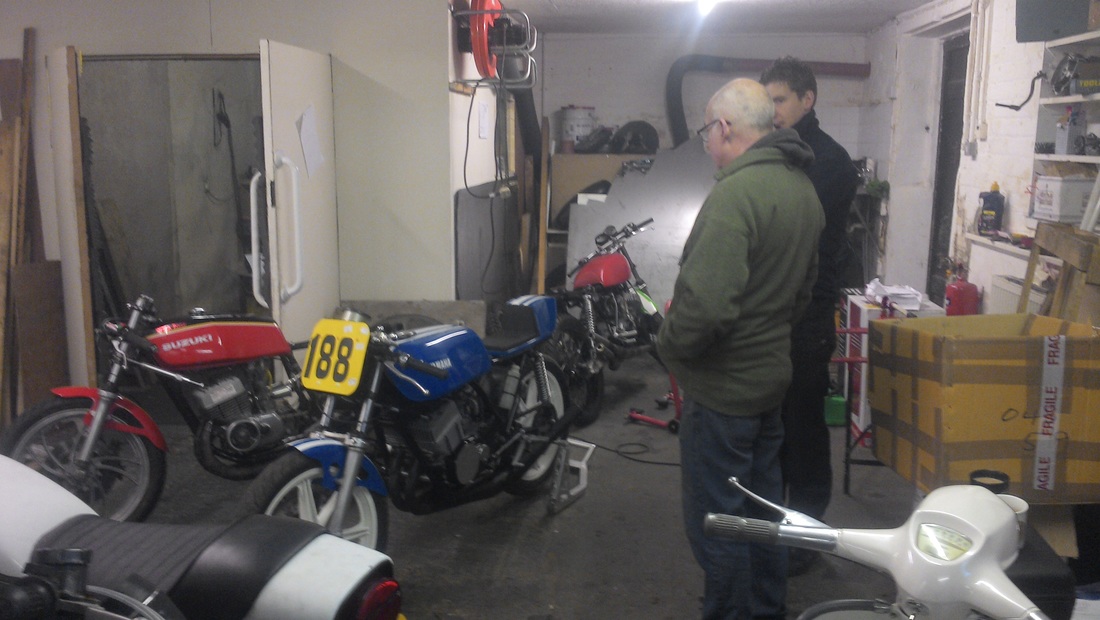 Chewing the fat with Mick over a cup of tea in his workshop - Mick Abbey's 'emporium of speed'
People have said to me that an RD250 can't make that much power. Well whether you believe the figures or not, Keith's bike went from 34hp in January to 52hp in March - so regardless of the numbers involved that's a pretty impressive rear wheel hp gain. My X7 ran out at 44hp on the same motor it last ran at 44.5hp the winter before so I was happy the motor was still strong after a full seasons racing. I'll post some graphs on here later to show the improvements that Micks tune has made.

Since owning this bike, Keith has done more development with it in 6 months than we did to the X7 in 3 seasons racing - this is in part due to the experience we have picked up in that time and were able to pass onto Keith. This is now one of the fastest 250's in the Aircooled class and Keith is doing it justice in his novice season with some impressive rides. As you can see from the photo's below he has added some nice bits to the RD since picking it up for a song last year as a 400 and putting it back to a 250;
An AP Lockheed caliper with TZ disk are the most recent upgrades along with some lightweight Falcon suspension units. After a rough first meeting at Pembrey where Keith holed 2 pistons before we discovered a significant air leak on the L/H inlet rubber, the bike has been very reliable. Keith knows his RD's inside out and has no issue's rebuilding his own engines so is able to keep on top of the little 250 with some tuning / dyno help from Mick Abbey. This engine was dyno'd in excess of 50hp, compared to my X7 at a mere 44hp - so its definitely got the poke. Keith is now working on ground clearance issue's, after finding he's scraping the pegs  reducing the weight of the bike and handling tweaks where he can. 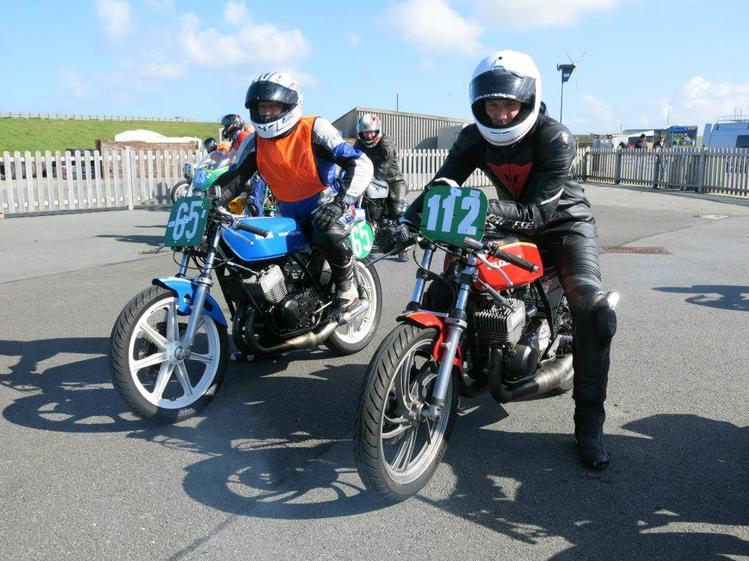 Waiting to get out @ Anglesey in 2015
Its taken me 3 years to get my X7 to it's current level of development - and Keith has done the same with this RD in less than one season! Fair play to him, with enthusiasm in abundance Keith's a great character to have in the paddock with us and if you want any advice on RD's, aircooled or LC, just drop him a message as he's come to be known as the oracle by me and Dad when it comes to Yamaha's....